Learn to play "Birds Amid Tree Shadows" with Chen Tao

Chen Tao is widely recognized for his mastery of the Dizi. The New York Times calls Tao “a poet in music” and his playing “a miracle of the oriental flute”. The maestro Herbert Von Karajan praises him as an artist whom “performed with his soul”. The New York City based Chinese newspapers World Journal and Tsingtao Daily have called him “the king of the flute” and a “master of the art of the flute”. In 2001, his flute recital was successfully held in Carnegie Hall, sponsored by the New York Flute Club. You can learn more in Chen Tao’s bio

Practice with Yang Qin at a slower speed
SAMPLE

Following these steps you will learn to play “Birds Amid Tree Shadows”, and be prepared to play other challenging tunes.

To view past participants’ testimonials about this program, click HERE.

Go to the PRODUCTS page to order. 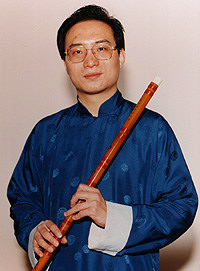 Chen Tao is a well-known Chinese woodwind musician; the founder and director of the Melody of Dragon Inc.; and the artistic director and conductor of the Chinese Music Ensemble of New York.

Before coming to the US, Chen Tao was an Associate Professor at the Central Conservatory of Music, a member of the Chinese Musicians Association and a member of the Chinese Folk Wind and String Instrument Association. Chen Tao graduated from the Central Conservatory of Music in 1986 from the Folk Music Department. His performing style combines the refined elegance of the southern school and the robust liveliness of the northern school. The sound of his flute is full, round, and rich, and is marked by a unique timbre that can truly be described ad enchanting.

Chen Tao is not only a specialist on the flute, xiao and xun, but he is also a virtuoso performer on other wind instruments such as the bawu, koudi, chiba and other folk wind instruments. In 1989 he entered the National Folk Instrument competition and won first place. On several occasions he represented various groups of Chinese musicians, including the Chinese Buddhist Musicians Ensemble, and visited the US, Germany, Italy, France, England, Holland, Finland, Sweden, Singapore, Hong Kong, Taiwan and Macao. During a trip to England he collaborated with the BBC Philharmonic Orchestra. He also collaborated with The Orchestra National de Lyon and The National Symphony Orchestra of Portugal on the performances that won high praise. His playing can be heard on several soundtracks of Hollywood movies including Seven Years in Tibet, Corrupter (with the New York Philharmonic), and the PBS documentary Under the Red Flag and the Voice of China. In the US, The New York Times called him a “poet in music” and his playing “a miracle of the oriental flute.” While on tour in Germany in 1989, the maestro Herbert von Karajan praises him as an artist whom “performed with his soul”.

Since coming to the US in 1993, Chen Tao has been invited to perform and lecture throughout the country. His first solo concert in the New York area was successfully held in December 1993. His second Flute Recital was successfully held in Carnegie Hall by the New York Flute Club in 2001. He has performed at the Lincoln Center, New Jersey Performing Arts Center with different groups including the Manhattan School of Music’s Chamber Orchestra–The Music Consort, Nai-Ni Chen Dance Company, H. T. Chen Dancers. China Institute in America invited him to perform and lecture on the Chinese flute during their spring season since 1995. He made his first Dizi home study course – Learn to Play “Birds Amid Tree Shadows” 2 measures at a Time with Chen Tao for www.2measures.com in 2002. The New York City based World Journal and Tsingtao Daily have called him “the king of the flute” and a “master of the art of the flute”.

Chen Tao is not only a virtuoso performer of Chinese folk music. He has also performed and recorded modern compositions by such well known composers as Tan Dun, Zhou Long, Chen Yi, Joan La Barbara, Carter Burwell, Bun-Ching Lam and Qu Xiao-song. He is acclaimed as a pioneer performer in the world of new music.

The Central People’s Broadcasting Station, the Beijing People’s Broadcasting Station, and Radio Shanghai have all arranged special programs to introduce his art. In addition, cable stations in both New Jersey and New York (channel 31) have run programs devoted to Chen Tao and his craft. Outside of performing, Chen Tao has also authored several professional articles on folk music. His music for flute “Leaves on Fall River”, for Bawu Music “Phoenix Tail Bamboo beneath the Moon”, for small ensemble “Coin Stick Dance” and many others have been recorded on CD. He has been invited by Beijing University, Qinghua University, Fudan University, Columbia University, Syracuse University, Colgate University, College of Charleston, Peabody Conservatory of Music, Rutgers University, Yale University, Harvard university, Cambridge University in England, and New Jersey Performing Arts Center to lecture and perform. In February 1996, invited by Taiwan’s National Music Ensemble in Taipei, Chen Tao held a concerto performance in the National Hall of Music and delivered a lecture on flute music, both of which garnered tremendous critical acclaim.

Chen Tao is truly an outstanding figure in the realm of woodwind music, both in China and throughout the world. 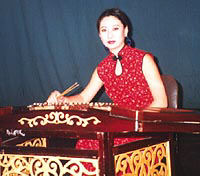 Li, Li-Qun started playing “Yang Qin” (Chinese hammered dulcimer) at the age of six and gave her first performance on stage at the age of ten. She graduated from the Central Conservatory of Music of Beijing in 1991. As a soloist and a member of the Central Chinese Music Ensemble of Beijing, she toured and performed throughout China and internationally. In 1995 , she won the second prize at the “Freedom Cup International Chinese Music Competition”. She has several recordings available on CD and cassette, and has performed music for films and television shows. Since immigrating to the United States in 1997, she has toured many states, delighting audiences with her musical talent.